In my last post, I described why I think the scene after Duncan's murder is one of the most frightening in Macbeth. I forgot to mention one of its most frightening features, that Macbeth can never return to being what he was before the murder.

This made me think about a movie that scared the s—t out of me when I was a kid: the 1959 Walt Disney comedy The Shaggy Dog. I saw it in 1969 as part of a rerelease double feature with The Absent-Minded Professor. 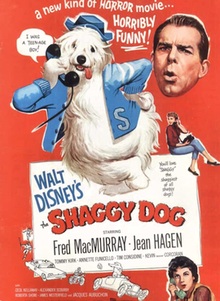 The film was advertised as "a new kind of horror movie . . . HORRIBLY FUNNY!" But to me there was very little that was funny about it. The main character's metamorphosis was scary, but what was truly terrifying was the sense that the transformation was permanent, that he could never go back to what he was.

That was far scarier than the fighting trees in The Wizard of Oz, though those were plenty scary.

aaeaehae said…
When considering getting a dog, be sure to take your lifestyle into account and try to select a dog that corresponds to your level of activity. Check out more dog care and advice at PetCareRx website.
11/27/22, 2:49 AM