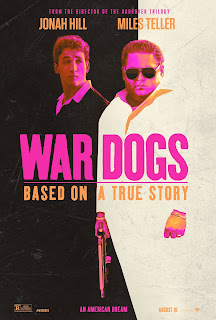 Shakespeare fans know that the title of the new Jonah Hill / Miles Teller movie War Dogs comes from a line in Julius Caesar, when Mark Antony crouches over Caesar's butchered body and predicts that Caesar's spirit will "Cry 'Havoc,' and let slip the dogs of war." (In a previous post, I talked about why Shakespeare used bearbaiting for the line's imagery.)

The movie has a Shakespearean title, but the book on which it's based has a Shavian/Virgilian one. The title of Guy Lawson's Arms and the Dudes echoes George Bernard Shaw's Arms and the Man, which echoes the opening lines of Virgil's Aeneid: "Arma virumque cano"—"Of arms and the man I sing."
Email Post
Labels: Julius Caesar