The recent discovery of what may be Britain's largest Neolithic monument made me think about how strange it is that Shakespeare never mentions Stonehenge. After all, the place is near his hometown, and we know that he read Geoffrey of Monmouth's Historia Regum Britanniae, which includes a description of how Merlin set up the stones as a monument to fallen Celtic warriors (157-160). We might expect Shakespeare to allude to that story somewhere in Cymbeline or King Lear since Geoffrey is his main source for both plays.

The idea that Celtic Britons, instead of people who lived thousands of years earlier, built Stonehenge has persisted. Many people still think, in the words of Spinal Tap, that the monument was built by "a strange race of people, the Druids" (and other Celts). 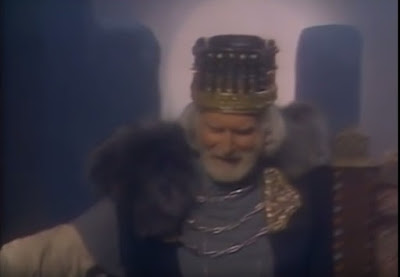 This was the educated view at the beginning of the nineteenth century, when William Charles Macready used a Stonehenge-inspired set for his groundbreaking King Lear (St. Clare Byrne 189). Others directors have followed his lead, including Michael Elliott, whose 1983 TV film of the play starred Laurence Olivier in his last Shakespeare performance.