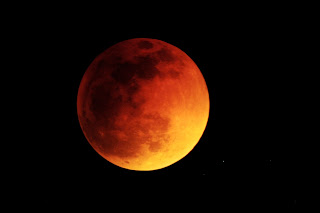 Sunday's big astronomical event made me wonder how many times Shakespeare refers to lunar eclipses. I can think of six.

1-2. In Sonnet 35, the speaker forgives his beloved by saying that everything has a bad side—"Clouds and eclipses stain both moon and sun"—and in Sonnet 107, he says that, like his love, some things last: "The mortal moon hath her eclipse endured."

3. In Hamlet's first scene, speculating about the Ghost, Horatio describes the portents that presaged the fall of Julius Caesar, one of which was a lunar eclipse: "the moist star / Upon whose influence Neptune's empire stands / Was sick almost to doomsday with eclipse" (106.11-13).

4. Othello laments murdering his wife by saying, "Methinks it should be now a huge eclipse / Of sun and moon, and that the affrighted globe / Should yawn at alteration" (5.2.108-110).

5. In King Lear, Gloucester attributes Cordelia's disinheritance and Kent's banishment to astrological events: "These late eclipses in the sun and moon portend no good to us" (1.2.96-97). (Later Edmund refers to these eclipses in his conversation with Edgar, but since they're the same ones, I'm counting them as a single reference.)

7. After Cleopatra deserts Antony at the Battle of Actium and surrenders to Caesar, Antony says, "Alack, our terrene moon / Is now eclipsed, and it portends alone / The fall of Antony!" (3.13.156-58) The "terrene moon" refers to Cleopatra, who was considered an avatar of the moon goddess Isis; the eclipse is her defeat, which portends Antony's.

That's every lunar eclipse reference I can think of—have I missed any?