New Portrait of Shakespeare? Probably Not 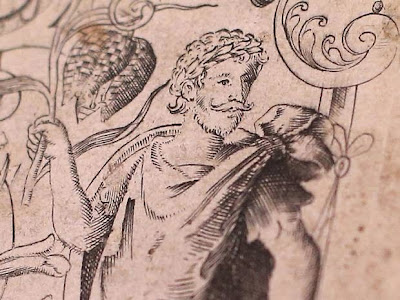 The BBC reports that "A 400-year-old botany book contains what could be the only known portrait of Shakespeare made in his lifetime, according to an academic expert." The book is John Gerard's 1598 Herball or Generall Historie of Plantes, and the "portrait" is in a corner of the elaborate title page, which is by William Rogers, one of the best-known Elizabethan engravers. The expert, "botanist and historian Mark Griffiths," writes regularly for Country Life magazine, which is publishing his claims.

According to The Guardian, Griffiths bases his case on "the symbols and flowers" that surround the drawing:


—A figure four and an arrowhead with an E stuck to it. In Elizabethan times, people would have used the Latin word “quater” as a slang term for a four in dice and cards. Put an "e" on the end and it becomes quatere, which is the infinitive of the Latin verb quatior, meaning "shake." Look closely and the four can be seen as a spear.
—A "W" – for William? And "Or"? A few months before it was engraved, Shakespeare’s father was granted a coat of arms with a golden background. The heraldic term for gold is Or.
—[The figure] is holding a snake’s head fritillary . . . . In Venus and Adonis, Shakespeare did not have Adonis metamorphose into an anemone after being gored by a boar, as tradition dictated. He turned him into a snake’s head fritillary.
—Two irises, one French, one English, can be seen as referring to Henry VI Part One.
—An ear of sweetcorn the man is holding refers . . . to . . . Titus Andronicus and the speech Marcus makes about gathering the sad-faced people of Rome, “this scatter’d corn into one mutual sheaf.”

These don't seem very convincing, so I'm afraid the Stratford memorial bust and the Droueshot engraving remain the only portraits that we can be sure depict Shakespeare.