The Hills Are Alive and Spur My Dull Revenge: The Seventh Soliloquy in Kenneth Branagh's Hamlet 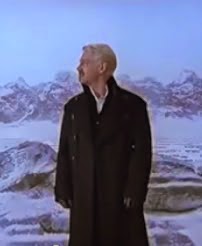 In my post on Hamlet's soliloquies, I provided a close reading of his seventh, which begins "How all occasions do inform against me / And spur my dull revenge!" (4.4.9.22-23). This speech, arguably the play's most complex, doesn't make it into Laurence Olivier's 1948 or Franco Zeffirelli's 1990 films since neither includes Fortinbras, whose imminent attack on the Poles is the "occasion" most on Hamlet's mind. Without the attack, the soliloquy makes no sense.

Kenneth Branagh includes the soliloquy, the attack, and all of Fortinbras's story in his 1996 film, just as he includes everything that would be found in a conflated Second-Quarto/First-Folio Hamlet. In this text's first scene, we hear how "emulate pride" made Fortinbras's father challenge Hamlet's father to single combat (1.1.79-83). Hamlet's father accepted, and the two kings agreed that the winner would take the loser's land, which is what happened when Hamlet Sr. killed Fortinbras Sr. As the play begins, Fortinbras Jr. has raised an army to get the land back, and the Danes are preparing for war. In the second scene, the new Danish king, Claudius, sends a message to the new Norwegian king, Fortinbras's uncle, asking him to stop his nephew. The message succeeds. In the second act, we learn that the Norwegian king has rebuked his nephew, who has sworn not to attack the Danes. To reward Fortinbras's obedience, the Norwegian king has given him money to wage war on the Poles—which is the last we hear of Fortinbras until we finally see him on stage, at the beginning of act four, scene four.

We see him long before that in Branagh's film. In the first sequence, as Nicholas Farrell's Horatio, in voiceover, describes Fortinbras's determination to recover the land his father lost, we watch the Norwegian prince, played by Rufus Sewell, angrily sweep model armies from a table and rip a map from a wall. We see him rip the map again in the second scene, as Derek Jacobi's Claudius describes the message he has sent to the Norwegian king. In the second act, as we hear about the message's success, we see what it has forestalled: Sewell's Fortinbras, on horseback in a dark woods, looks at Elsinore as if ready to burn it to the ground. As we hear a description of the Norwegian king's rebuke and Fortinbras's obedience, we watch it. The king—in a cameo by the venerable John Mills—slaps Fortinbras in the face. The prince bows low, then rises and swears not to attack Denmark. The king smiles and mouths that he will provide his nephew money to wage war on the Poles. Fortinbras embraces him.

There's no indication in the text that the prince hasn't submitted entirely to his uncle's will, but the ambiguous look on Rufus Sewell's face hints at a different story, one that will climax in Fortinbras's assault on Elsinore in the film's final scenes. Again, the text provides no evidence for this interpretation: in the last scene, Fortinbras is visiting Elsinore, not attacking it. But this doesn't mean that Branagh makes a mistake in presenting the story this way. By tweaking Fortinbras's story, he highlights a feature of Hamlet that might go unnoticed—the parallels between its three revenge plots.

The literary critic Northrup Frye described these plots as "concentric rings of revenge" (90). In the inner ring, Hamlet kills Polonius, and Laertes avenges the murder by killing Hamlet. In the middle ring, Claudius kills Hamlet's father, and Hamlet avenges the murder by killing Claudius. In the outer ring, Hamlet's father kills Fortinbras's father, and Fortinbras Jr. tries to avenge the killing by attacking Denmark to get back the land his father lost. His uncle prevents the attack, but at the end of the play Fortinbras achieves his revenge by regaining the lost Norwegian land and gaining the Danish crown.

According to Frye, much of Hamlet's complexity results from the way characters play different roles—victim, murderer, or avenger—in the three rings. For example, Hamlet's father is the victim in the middle ring but the murderer in the outer ring. Hamlet is the murderer in the inner ring but the avenger in the middle. Things get even more complicated when we consider shared names: someone named Fortinbras is both victim and avenger in a single ring, and someone named Hamlet is the victim in one ring, the murderer in another, and the avenger in a third.

People often compare the avengers of the inner and outer rings, contrasting Laertes' vigorous pursuit of revenge with Hamlet's supposed dithering. They compare Fortinbras and Hamlet less often. It's not hard to see why. Fortinbras appears only in act four, scene four, and at the end of the play. Unlike Laertes, he never shares the stage with a living Hamlet.

Yet Fortinbras is as much Hamlet's rival as Laertes is. We don't see this the way we see the Laertes-Hamlet rivalry, which manifests itself physically, in the tussle at Ophelia's grave and the duel at the end of the play. The Fortinbras-Hamlet rivalry appears only in words, in the seventh soliloquy, when Hamlet contrasts Fortinbras's impending attack on the Poles with his own failure to take revenge.

To prepare us for that contrast, Branagh visually contrasts the character's situations in the scenes immediately preceding the soliloquy. An armored Fortinbras, followed by his army, gives commands on horseback, while Hamlet, followed by his guards Rosencrantz and Guildenstern, trudges through the snow. That Hamlet has to look up to question a Polish officer on horseback foreshadows the sense of inferiority that he will express in his soliloquy. We nevertheless sense his strength as he dismisses Timothy Spall's Rosencrantz and Reece Dinsdale's Guildenstern in a tone that echoes Fortinbras's commands. Though Rosencrantz looks worriedly at his colleague—Spall's face acting is one of the film's small pleasures—both guards quickly obey their prisoner. He's still their prince.

The soliloquy's setup is perfect, as is the composition of its first shot. In the foreground, we have Hamlet in a medium close-up (head and shoulders). In the background, we have the occasion that will spur his revenge: Fortinbras's army marches across a snowy plain with mountains rising in the distance.

The trouble begins with Patrick Doyle's music, which resembles his music for the band-of-brothers speech in Branagh's 1989 Henry V. Quiet tympani thumps beneath a martial melody played by strings and horns, which fits the army marching on the plain but not the soliloquy's tortured and tortuous meditations. When Branagh speaks the soliloquy's opening exclamation, the camera begins pulling back, which also signals trouble. Pulling back works well for the big, declamatory speeches in Shakespeare—Olivier discusses this in On Acting (280)—but Hamlet's soliloquies, especially this one, require something different. We should move toward Hamlet's tormented mind, not away from it.

Branagh's camera movement and music fit his rendering of the soliloquy, which is something like his band-of-brothers speech, a rousing call to action. But Hamlet isn't Henry V, a master rhetorician trying to convince soldiers to be glad they have fewer men than their enemy does. Whatever Henry believes—surely he wishes he had more men—he speaks confidently to persuade his soldiers. In the seventh soliloquy, an uncertain Hamlet tries to convince himself, which is harder since he can object to his own arguments. It's as if Williams, the common soldier who questions the justice and value of Henry's war, could interrupt during the band-of-brothers speech:
HENRY He today that sheds his blood with me
Shall be my brother . . .
WILLIAMS Come, 'tis a foolish saying!
HENRY . . . be he ne'er so vile, This day shall gentle his condition—
WILLIAMS You say so to make us fight cheerfully.

Inside Hamlet, there's a persuasive Henry and a skeptical Williams, as well as an honor-loving Henry and a pragmatic Falstaff. Before the battle of Agincourt, Henry tells his soldiers they should be happy their numbers are few because "The fewer men, the greater share of honor" (4.3.22), as if honor were a pie to share, a physical thing. Before the battle of Shrewsbury, Falstaff tells himself there's no point in getting killed for honor because honor is intangible: "What is honor? A word. What is in that word honor? What is that honor? Air." (5.1.133-34). Hamlet expresses both views. Henry-like, he pushes himself toward action by describing honor as so important we should need nothing else to motivate us:
Rightly to be great
Is not to stir without great argument,
But greatly to find quarrel in a straw
When honor's at the stake. (4.4.9.44-47)
Four lines later, Falstaff like, he undercuts this by referring to honor disparagingly, as insubstantial, "a fantasy and trick of fame" (51).

Branagh ignores these contradictions, treating the soliloquy as simply Hamlet's way of driving himself toward revenge. He makes his version of the soliloquy comprehensible to audience members who haven't read the play—or haven't read it recently or carefully—by enunciating clearly, gesturing, and changing his tone of voice to convey his meaning. When he refers to "he that made us" (26), he looks up toward God; when he says, "Witness this army" (37), he moves head toward Fortinbras's troops. His voice curdles with disgust as he speaks of the "craven scruple / Of thinking too precisely" (30-31) and becomes louder as he nears "greatly to find quarrel in a straw / When honor's at the stake." His increased volume indicates his increasing conviction, not, as it should, his increasing agitation.

As Shakespeare's Hamlet nears the soliloquy's conclusion, this agitation reaches a fever pitch, as his excited imagination conjures up a surreal vision of the impending battle: tens of thousands of soldiers slaughter each other on a piece of ground "Whereon the numbers cannot try the cause" (53). By the time Branagh's Hamlet reaches this point, the camera has pulled so far back that we can see Fortinbras's army spread out over the plain. The background contradicts the scene Hamlet describes, in which the army would be larger than the ground. A different filmmaker might have used the contradiction ironically, but Branagh isn't after irony. His Hamlet spreads his arms, like Julie Andrews in The Sound of Music, as he shouts, "O, from this time forth, / My thoughts be bloody, or be nothing worth!" (55-56).

In the play, these lines are more disturbing than triumphant, since they return Hamlet to the monomaniacal vow of his second soliloquy. Branagh renders them as if they represent an advance in Hamlet's thinking, as if he's finally overcome the obstacles to his revenge.

What do you think? Have I got this right? Have I been too hard on Sir Kenneth?  More important, am I the first person to make the Julie Andrews analogy?
Email Post
Labels: Branagh Hamlet Observations