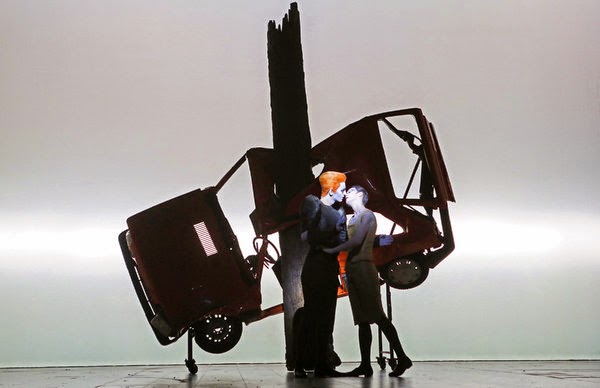 
No theater director working today has a signature as recognizable, and as unvarying, as Robert Wilson. Whether he is staging a Wagner or a Monteverdi opera, an Ibsen play, a piece about the life of Marina Abramovic or a selection of Shakespeare’s sonnets, as he currently is at the Brooklyn Academy of Music, Mr. Wilson employs the same stylistic markers: starkly minimalist settings, luminous backdrops on which bands of glowing light slowly rise or fall, and actors in bright white makeup looking like merry or morbid ghouls, gliding across the stage in ritualistic movement.

“Shakespeare’s Sonnets,” a mostly ponderous evening that Mr. Wilson created in collaboration with the Berliner Ensemble, features music by the singer-songwriter Rufus Wainwright, and uses 25 poems [in German translation] as a springboard for a bizarre, dreamlike pageant. But neither Mr. Wainwright’s appealing music nor Shakespeare’s verse — not so bad either — plays the leading role here. That belongs, as always, to Mr. Wilson.

Isherwood concludes by describing a scene that

Which essentially sums up my response to “Shakespeare’s Sonnets” in its entirety.

If you'd like to judge for yourself, here's the scene Isherwood is talking about, from the original 2009 production.

The text is a German translation of Sonnet 23:


As an unperfect actor on the stage
Who with his fear is put beside his part,
Or some fierce thing replete with too much rage
Whose strength's abundance weakens his own heart,
So I, for fear of trust, forget to say
The perfect ceremony of love's rite,
And in mine own love's strength seem to decay,
O'er-charged with burthen of mine own love's might.
O let my looks be then the eloquence
And dumb presagers of my speaking breast,
Who plead for love, and look for recompense
More than that tongue that more hath more expressed.
O learn to read what silent love hath writ;
To hear with eyes belongs to love's fine wit.