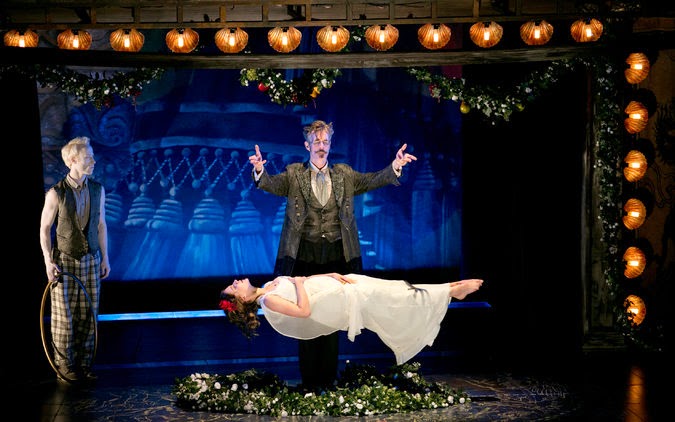 The New York Times reports on the American Repertory Theater's new production of The Tempest, codirected by Penn and Teller's Teller, with music by Tom Waits:


CAMBRIDGE, Mass. — Shakespeare’s late romance “The Tempest” itself undergoes a sea change in the inventive production of the play at the American Repertory Theater here. The magic of Prospero has a razzle-dazzle allure in this freshly reimagined, steampunk-stylish production, directed and adapted by Aaron Posner and Teller (of the magic-meisters Penn and Teller) and featuring songs judiciously culled from the Tom Waits catalog.

In this production, the play's supernatural magic becomes stage magic: "In its playful use of such traditional illusions as card tricks (Ariel’s specialty) and levitation (Miranda floats upward as Prospero’s hands flicker above her during the wedding pageant), this colorful production weaves strands of the plot with Teller’s how-do-they-do-it feats, keeping the audience in happy suspense as it awaits the next novelty." The reviewer, Charles Isherwood, concludes that "[i]n its frolicsome use of traditional magic acts, this freewheeling “Tempest” awakens in the audience a . . . sense of pleasurable, almost childlike wonder."
Email Post
Labels: News Tempest