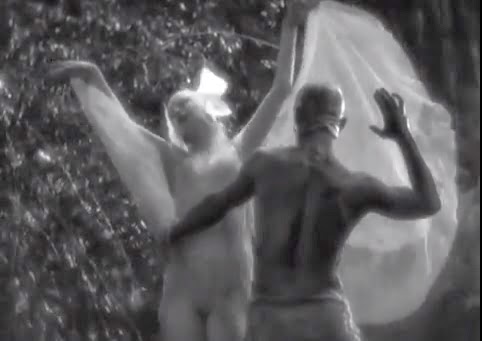 Branislava Nijinska never attained the fame of her older brother Vaslav Nijinsky, whose dancing with Sergei Diaghilev's Ballets Russes made him an international sensation. Branislava's career began the same way, dancing for the Russian Imperial Ballet and then the Ballets Russes. In 1921 she became Diaghilev's choreographer and for four years worked with him and other luminaries of the Parisian avant-garde—Cocteau, Stravinsky, Picasso—creating performances that helped make ballet central to modernism.

After leaving the Ballet Russes, she worked for various directors, including Max Reinhardt, whose 1920s and early '30s Berlin productions represented modern theater's sharpest edge. For his 1931 production of Offenbach's Tales of Hoffman, Nijinska designed dances that were performed on a revolving stage in front of three thousand people (Nijinksa 521, "Stupendous Production"). The following year she settled in Paris and formed her own company, which lasted until Reinhardt summoned her to Hollywood to create the dances for his 1935 film of A Midsummer Night's Dream.

Reinhardt had left Germany after the Nazis' rise to power in 1933. In 1934 he staged an elaborate production of A Midsummer Night's Dream in the Hollywood Bowl, with a cast that included the fourteen-year-old film star Mickey Rooney as Puck. Hermia was played by Gloria Stuart, then at the height of her first fame, having co-starred with Claude Rains in The Invisible Man the preceding year. (She would achieve a second round of fame late in life, playing a 100-year-old Titanic survivor in James Cameron's 1997 film.) When Stuart's Universal Studios contract forced her to leave Midsummer, one of her understudies, an eighteen-year-old Olivia de Havilland, took over her role.

The Hollywood Bowl Midsummer so impressed Jack Warner that he hired Reinhardt to make a film version. Shakespeare had been a popular source for silent movies, but no one had yet made a successful feature-length Shakespeare talkie. The first attempt, the 1929 Mary Pickford / Douglas Fairbanks Taming of the Shrew, had tanked at the box office so Warner was gambling on Midsummer. He and Reinhardt improved their odds by casting the studios' top stars. Jimmy Cagney would play Bottom. Joe E. Brown, one of the era's most popular comedians, would play Flute. Dick Powell, the romantic lead of several Warner Brothers musicals, would play Lysander. Mickey Rooney would reprise his Puck, and Olivia de Havilland—in her first film role—would replay her Hermia.

For the music and costumes, Reinhardt hired two artists he had worked with in Europe: the Austrian composer Erich Wolfgang Korngold and the Danish designer Max Rée. Together with Nijinska, they created the film's extraordinary dance sequences, the most memorable of which takes place in what would be the play's act four.

Before it begins, we see Victor Jory as Oberon riding a black horse. In front of him sits the changeling, perhaps played by future underground filmmaker and Hollywood Babylon author Kenneth Anger (this is disputed). With Puck perched on a nearby rock, they spy on the drowsy, ass-headed Bottom, who interjects an occasional, rhythmic "hee-haw" as Anita Louise's Titania appears to sing:
Sleep thou, and I will wind thee in my arms
. . . . . . . . . . . . . . . . . . . . . . . . . . . . . . . . . .
So doth the woodbine the sweet honeysuckle
Gently entwist; the female ivy so
Enrings the barky fingers of the elm.
(4.1.37, 39-41)
The actual singer is Carol Ellis, and in the original play, the lines are spoken, not sung (this is true of many lines in the film).

Oberon responds to the scene as he does in the play, announcing that he will uncharm his wife: "I will undo / This hateful imperfection of her eyes" (4.1.59-60). The film's Puck replies with lines that come from earlier: "My fairy lord, this must be done with haste, / For night's swift dragons cut the clouds full fast" (3.2.379-80). In the original, these lines are Puck's reaction to Oberon's orders that he darken the night and make Demetrius and Lysander search for one another until they fall asleep. Lines from that speech, not spoken in the film, seem to have inspired features of Nijinska's ballet: Oberon's flowing black cape evokes the "drooping fog as black as Acheron" (3.2.358) that Puck uses to hide the stars, and the costumes of Oberon's dark assistants recall the "batty wings" of "death-counterfeiting sleep" (3.2.365-66).

The ballet is set to Mendelssohn's Nocturne from his Midsummer incidental music (Opus 61). Korngold lowers the pitch a half step, making the Nocturne darker, and adds more horns, making it grander.

When we hear the first horn, Oberon raises his arms. His diaphanous black cape blows back, and he rides forward out of the frame. Dark figures run beside his cape, flapping their wings. They leap over the crest of a hill and surround Titania's fairies, who shuffle forward, leaning on one another, their white faces and gowns contrasting with their shepherds' black faces and costumes. Meanwhile Oberon glides forward. His cape billows behind him, rippling in the same wind that blows over the sleeping lovers and Titania and Bottom. The fairy king has become Hypnos, the Greek god of sleep, and the wind the waters of Lethe, bringing oblivion to gods and mortals alike.


One fairy, played by the Danish dancer Nini Theilade, resists his power. When his servants encircle her, she breaks free, fluttering her moth-like wings until her flight is arrested by a single dark figure. After they drop to the ground and look in one another's eyes, the dark figure lifts Theilade onto his shoulder. Her hands dance in the air, recalling the Javanese dances that were part of Theilade's heritage (on her mother's side, she was descended from Javanese royalty). The sequence ends with her fluttering hands disappearing into the stars.