Orson Welles's Othello will be shown as part of Chico State's University Film Series on Tuesday, April 10, at 7:30 p.m. in Ayres 106. 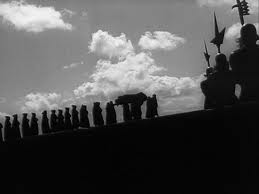 This extraordinary film was shot in Italy and Morocco over the course of three years and won the Palme d'Or at the 1953 Cannes Film Festival. It was out of circulation for decades, but in 1987 film buffs discovered the negatives in a New Jersey warehouse and began a complicated, million-dollar restoration. Rereleased in 1992, the film employs shadows and camera angles more radical than anything in Citizen Kane to convey the web of envy, deceit, and jealousy that enmeshes the characters.
Email Post
Labels: Othello Welles