Shakespeare Summary: Much Ado About Nothing, 3.2-4.1

Leonato, Benedick, Don Pedro, and Claudio enter. When Don Pedro says he will return to Aragon after Claudio's wedding, Claudio offers to accompany him. Don Pedro rejects the offer: he will go Benedick, who is always merry because he's never been in love. Benedick says he's not merry now because of a toothache. Claudio and Don Pedro jokingly debate the toothache's source. Claudio says it results from being in love, and he and Don Pedro note signs that this is Benedick's condition: he has shaved, wears perfume, and is melancholy. After an irritated Benedick leaves with Leonato, Don Pedro and Claudio say Benedick is going to ask for Beatrice's hand. Don John appears and tells them Hero is unfaithful: if they go with him tonight, they will see a man enter her bedroom window. Claudio says that if he sees this, he will disgrace Hero in front of the wedding congregation; Don Pedro says he will join him.
In comically confused language, Dogberry and his assistant Verges discuss which man to put in charge of the watch. Verges suggests Seacoal, who can read and write. After telling Seacoal not to be vain of this accomplishment, Dogberry gives him and the other watchmen mixed-up orders that mean they should do nothing. Seacoal takes the point, telling his men that they'll sit by the church until two o'clock then go to bed. After Dogberry tells them to watch around Leonato's house, he and Verges leave. Borachio and Conrade appear. Seacoal and his men overhear Borachio tell Conrade that Don John led Claudio and Don Pedro to an orchard where they saw Margaret pretending to be Hero, leaning from a window, saying goodnight to Borachio; Borachio's words confirmed Don John's slanders and caused Claudio to vow that he would shame Hero at tomorrow's wedding. The watchmen arrest Conrad and Borachio.
Hero and Margaret discuss Hero's wedding dress, and Margaret embarasses Hero with a bawdy joke. Beatrice arrives, saying she's ill, and Margaret teases her, saying she's in love. They're interrupted by Hero's maid, who tells them that the men have come to bring them to church.
The "wedding" begins with Leonato telling the friar to use a short form of marriage: he can go into details later. Leonato tries to gloss over Claudio's first remarks, which indicate he doesn't mean to marry Hero. Claudio asks Leonato if he gives him his daughter. When Leonato says that he does, Claudio tells him to take her back—she's unchaste. Leonato starts to say that if Claudio took Hero's virginity it was because she was about to marry him. Claudio interrupts: he treated Hero as a brother treats a sister. He rages against Hero, saying her outwardly chaste appearance conceals a lustful nature. Leonato asks Don Pedro why he says nothing. Don Pedro responds that he is dishonored because he arranged a marriage between his friend and a prostitute. With Leonato's approval, Claudio interrogates Hero, asking what man she talked with between twelve and one o'clock last night. When she says she didn't talk with a man at that time, Don Pedro says she's lying: he, Don John, and Claudio heard her talking with a man about the thousand "vile encounters" they had had. Don John says they shouldn't talk about the details. Claudio bids Hero farewell, lamenting her fair exterior and foul interior. Hearing these words, Hero faints. Don John says she does this because her crimes have been revealed. He, Don Pedro, and Claudio leave. 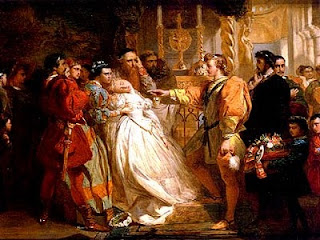 Marcus Stone, Claudio, Deceived by Don John, Accuses Hero (c. 1861)
From Shakespeare Illustrated
The scene continues with Leonato wishing Hero were dead. When she recovers from her faint, he rages against her. Benedick tries to calm him then asks Beatrice if she slept with Hero last night. Hero says she didn't, though she slept with her every night for a year before that. Leonato says this confirms the accusations (actually it does the opposite since Hero couldn't have had those thousand vile encounters, at least not in the last year). When Leonato wishes again that Hero were dead, the Friar says that he watched Hero when the accusations were made: her demeanor shows she is innocent. Hero defends herself, and the friar marvels that the princes could be so mistaken. Benedick says Don Pedro and Claudio are honorable—Don John must have decieved them. Leonato says that if the accusations are true, he'll tear his daughter apart, but if they're false, then despite his age he'll fight those who have dishonored her. The friar advises him to pretend his daugter is dead by performing funeral ceremonies and hanging epitaphs on the family tomb: this will make Claudio regret what he's done, even if he believes his accusations are true; if the plan fails, then Leonato can hide his daughter in a nunnery. Benedick urges Leonato to adopt the friar's plan, and Leonato agrees. Everyone leaves except Benedick and Beatrice.
After expressing his sorrow that Beatrice is crying, Benedick says he believes Hero has been slandered. Beatrice says that someone should defend her honor but that this isn't Benedick's job. Benedick confesses his love, and Beatrice starts to say she loves him then tries to change the subject. After Benedick finally gets her to say she loves him, he asks her to have him do something for her. She tells him to kill Claudio. He refuses. She tries to leave, but he stops her. She rages against Claudio's vicious behavior: if she were a man she would eat his heart in the marketplace. When she says no one is man enough to challenge Claudio, Benedick asks if she's certain Claudio has wronged Hero. She affirms her certainty, and Benedick says he will challenge Claudio. He tells her to comfort Hero while he spreads the rumor that Hero is dead.
Email Post
Labels: Much Ado About Nothing Summaries