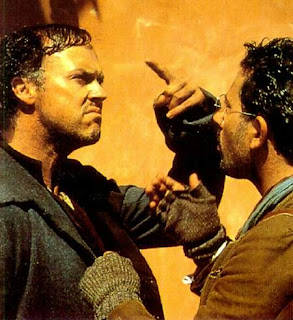 Branagh Film Clips Much Ado About Nothing Resources

Directors usually handle Shakespearean soliloquies in three ways: (1) they have actors speak directly to the audience, as they would have on the Elizabethan stage; (2) they have actors speak to the air, as if yammering on cellphones; or (3) they use a voice-over, as if we were wire-tapping the characters' brains.
Each strategy has its advantages.
Speaking directly to the audience works well for villains, who share their nasty schemes, preparing us to watch with horror as they dupe unknowing victims. The technique also allows for dark comedy: for example, Ian McKellan's Richard III and Harry J. Lennix's Aaron (in Julie Taymor's Titus) act as satanic stand-up comedians, terrifying us and making us laugh with the same speech.
Having actors talk to themselves produces a different effect, allowing us to pretend we're hearing a character's inward thoughts. This works in both comedies and tragedies. In a comedy, we laugh—or chuckle inwardly—when we hear Emma Thompson'…
Read more

Though Hamlet's "To be or not to be" speech is his fourth soliloquy, many websites call it his third. They're skipping the twenty-line speech that follows his interview with the Ghost, which in my view is a particularly bad mistake since Hamlet's monomaniacal vow there is at the heart of his tragedy.

The internet's cosmic sinkhole of misinformation will never be filled, but it's worth throwing some dirt in when we can, so here's an accurate list of Hamlet's soliloquies, with a short description of where they occur and what they say, along with a few observations.